Since the introduction of the Goods and Services Tax (GST) in the Indian economy, there has been a complete overhaul. There have been debates both in favour of the new and simplified system as well as criticism for a sudden shift. Both the previous as well as the present finance minister have dodged any controversial questions on the impacts of brining the GST regime by the Modi Government. Even two year post its enactment of the statute, the government has still been unable to put a comprehensive system in place. The original enactment had undergone various modifications by way of amendments. The latest was on 22 December, 2018 when the GST rates on 28 goods and 53 services were revised by a panel consisting of all federal and state finance ministers. 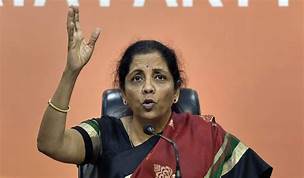 In lieu of the controversial taxing regime, on 11th October (Friday), the present Finance Minister Nirmala Sitharaman was confronted about about the status of implementation of the GST Act at an interaction with businessmen, entrepreneurs, Chartered Accountants & others. As per a report by the ANI, on questions being asked on the difficulty posed by the new taxing regime Sitharaman apologized for the regime not being able to live up to the satisfaction of the audience. However, with a due acknowledgment that the present GST regime has multiple flaws, she also said that the coming of the GST Act was historic as after a long time in the country, many parties in the Parliaments and different concerned state authorities had coherently worked for the coming up of the Act. She explained that she is aware of the difficulties the Act poses, but just on the basis of few experiences, one should not say ‘what a god damn structure is this’. Her statement as quoted by the ANI is:

“I wished from day one, that it (GST) met with your satisfaction but I am sorry that it did not meet with your satisfaction. We cannot damn it…it was passed in Parliament and in all the State assemblies. It might have flaws; it might probably give you difficulties but I am sorry, it is the ‘kanoon’ of the country…I appeal to you to work together so that we have a better framework if it is giving problems now,” said the Nirmala Sitharaman.

Nirmala Sitharaman confronted on GST issues in the country:

Among the attendees was a representative of Cost Accountant Association in Pune, remarked to Sitharaman that when the GST regime had come up, people were expecting it to be a Good and Simple Tax. Rather than bringing to the table a more simplified structure as intended, the framework has heightened the complexity of law, potential litigation and thriving corruption, the regime has ruptured the smooth administration of the taxation system. He also complained that the intent of the government seems that it is only concentrated towards increasing the revenue as their suggestions were utterly disregarded previously and not taken into consideration. He further demanded for a time slot to meet her in Delhi and talk about the difficulty-posing nuances of the system. The attendees complained that the suggestions of the officers regarding the difficult faced in making the GST should be considered to further reform the structure. The system is causing inconvenience to people from all profession, be it journalist of consultant, resulting in ‘cursing’ the government for the flawed system in place.

In reply, as reported, Nirmala Sitharaman did allocate a time slot to him, scheduling a meeting in New Delhi later. This is not the first time the present finance minister has been held affix with questions relating to the GST regime. When asked once before, she attributed the failures of the GST Act to weather-borne disasters and poor compliance at all levels. She remarked that the collection under the GST regime has not been very stable and strong in various districts of the country. She named Uttarakhand, Karnatakna Maharashtra and Himachal, where return filing had to be postponed due to the natural calamity of flood hitting these areas.

On earlier occasions, she has told to the public that the task of reforming the system is already in the pipeline. The revenue secretary has already formed a committee to examine and identify areas where the collection under the regime has not been sufficient as per the expectations of the general public. She has informed about reports of evasions have come to their notice. There are ongoing efforts to see how to plug these issues and examine whether there has been any instances of under-invoicing. The bids on the GST regime are higher because it has been billed as the biggest reform in indirect taxation regime in India.

Privatization to aid fiscal deficit is on full swing under the Modi government. What’s next?

How much does it cost to print a currency note, know where the printing of currency takes place in India

‘Muslims did not vote for BJP in state polls’: Sharad Pawar...

Teji Mandi Newsletter: Taking stock of the financial situation amid the...

‘Have you lost it completely?’: Twitter slams Prasar Bharati after broadcaster...

Mumbai Weather: Expect temperatures to rise by 2-3°C over next few...

Why Indians are Happy About Policemen Beaten By Lawyers At Saket...

How much does it cost to print a currency note, know...