In the previous parliamentary session Samajwadi Party leader Azam Khan stirred a fresh controversy by making a ‘sexist remark’ against the BJP Member of Parliament Rama Devi who was also chairing the Lok Sabha session. His comment instilled an uproar within different groups in the country, demanding an unconditional apology. The matter escalated to the extent that even the National Commission for Women (NCW) and the Delhi Commission for Women (DCW) released statements in condemnation of the said comment and called it “lecherous and disgraceful”. The controversy began in a discussion ongoing on the triple talaq bill. Khan while referring to the intervention of the Union Minister Mukhtar Abbas Naqvi read out a couplet saying, “… tu idhar-udhar ki baat na kar …” (literally translating to ‘do not divert from the topic’). At this comment of Khan, the presiding chair of the Lok Sabha session and BJP MP Rama Devi asked Khan not to “look here and there” and address the Chair. In response to the statement made by the chair, the Samajwadi Party member made a sexist remark at her saying,

The incident was not the isolated one when it came to the comments made by the infamous Samajwadi Party minister Azam Khan. Once earlier he was booked for sedition for a controversial remark for the Army. Also, in the case of a molestation in Rampur, Uttar Pradesh he had also remarked that ‘UP girls should stay inside the houses to avoid molestation’. However what caught fire was his political statement made in the Bulandshahar Gang Rape case. He made a comment on the incident which pointed towards the victim and her family, including her mother to be ‘liars’. He said

“It must be investigated whether people, with the opposite ideology or those who want to come to power, are behind this incident in order to malign the government.”

His statement was seen as an attempt to shield the government after a massive upheaval in the society against it, due to the gang rape of a 13 year old girl and her mother. The women-daughter were raped by a group of bandits near Bulandshahr. In this matter, the Supreme Court had made Khan apologise for the comment unconditionally.

Question of permissible restrictions on Freedom of Speech before the Supreme Court: 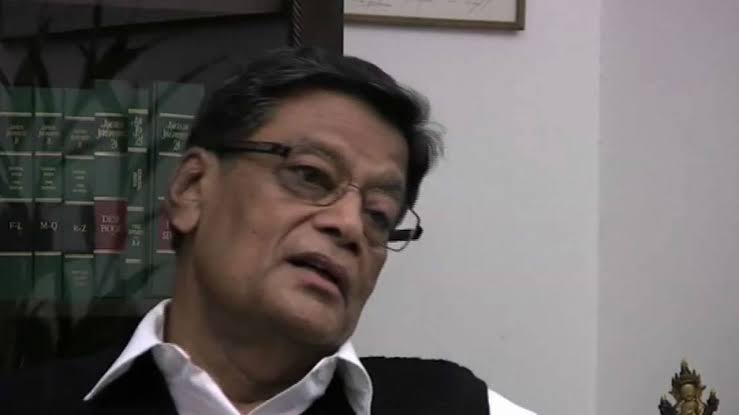 In light of the said event of ‘controversial remarks’ by then Uttar Pradesh minister Azam in the Bulandshahr gang rape case, this matter has arisen before the Supreme Court. On 23 October, 2019 Attorney General K K Venugopal had suggested to the Supreme Court to examine whether the freedom of speech and expression as guaranteed by the Constitution under Article 19(1)(a) has any other permissible restriction apart from those mentioned under Article 19(2). Venugopal gave his suggestion before a Constitution Bench of five judges. The bench was headed Justice Arun Mishra and comprised of Justices Indira Banerjee, Vineet Saran, M R Shah and S Ravindra Bhat. The main question before the said bench is to determine the question on the permissible limits of exercising free speech of a minister or a person who is occupying a high office.

READ  Ayodhya Verdict 2019: Temple to be built on disputed land, Muslim side will get land in Ayodhya

This case came before the five-judge Constitution Bench, after a three-judge bench, headed by then Justice Dipak Misra, had referred the matter. The reference to a Constitution Bench came after senior advocates Fali S Nariman and Harish Salve who are assisting the court as amicus curiae suggested that the gravity of the matter is serious and is of great importance and should be referred to a Constitution Bench. Both the advocates had submitted to the court earlier the questions they wanted it to examine in the said matter of the limits on the fundamental right of freedom of speech and expression.

Pertinent Questions as pointed out by Attorney General K.K. Venugopal:

Continuing with the said matter, Attorney General K K Venugopal proposed three more pertinent issues in this matter before the court. He said, the bench should look into the following questions. First, whether the amount of restrictions imposed on the rights guaranteed by Article 19(1) (a) can be greater in the case of persons holding high public office, including that of a Minister. Second, whether the rights guaranteed under Article 21 of the Indian Constitution can be enforced against individuals and/or private corporations who do not fall within the definition of the term ‘state’ as given in Article 12. Third, whether or not can the State proceed against an individual for the statements made by him, in the absence of a statutory position on the sole ground that the statements affect the fundamental right of another individual.

The bench has remarked the questions as ‘very important’. In the discussions ongoing, Justice Bhat remarked that in matters of habeas corpus, the right is not enforced against the state, but against individuals

“But your Lordships will not expand it to other fundamental rights..question is whether any of these rights except those specified will lie against individuals”.

Issues identified by the three-judge bench before reference:

The matter when was before a three-judge bench, it had also identified issues which have to be answered in the said matter, before making the reference to a Constituion Bench. First, it wanted to clar the air as to whether a person holding a high office can pass unnecessary comments like “it is an outcome of political controversy” in case of rape, gang-rape, murder or other heinous offence. Especially, where a victim files an FIR against another person or group of persons and the person making the comment has nothing to do with the offence. This clearly pointed to the remarks made by Azam Khan in Bulandshahar gang rape case. Second, it wanted the bench to shed light upon whether if the “State” should allow such comments “as they have the effect potentiality to create a distrust in the mind of the victim as regards fair investigation and, in a way, the entire system”. Moreover, whether or not the statements come within the ambit and sweep of freedom of speech and expression. Third, it directed the bench to examine whether or not such comments (which are not meant for self-protection) defeat the concept of constitutional compassion and also conception of constitutional sensitivity?”