After the Overseas Citizenship of India (OCI), card-status was revoked for journalist and author Aatish Taseer, in an interview with India Today he has commented on the matter. He said that Prime Minister Narendra Modi is leading India on a path that leads to fear, political vendetta and anti-minority environment. It is believed that the sudden revocation of the OCI card status is a direct fallout of his publication in the TIME Magzine which managed a spot on the cover page of its international edition. The piece described Prime Minister Narendra Modi as India’s Divider in Chief. Despite the repercussions, Taseer has not changed his stand and has said in his exclusive interview with India Today TV from New York that:

“He (PM Narendra Modi) is the architect of it (anti-minority environment), and he is answerable,” 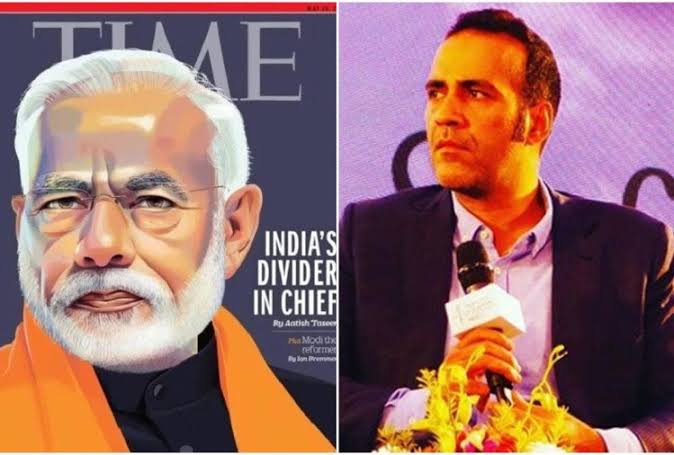 Taseer while speaking to the Consulting Editor Rajdeep Sardesai of India Today TV expressed that what happened to him in the exercise of his freedom of speech and expression is ‘a very very ugly thing’ in the largest democracy of the world. He said India is the light of freedom in Asia, and it is deplorable that it is going after someone who is a small writer in this manner. The reason, as stated by the Ministry of Home Affairs [MHA] for revoking the OCI cardholder status is that he concealed material information about the origin of his father, who happens to be from Pakistan. However, Taseer had said that the move is just another manner of the Modi led Bhartiya Janta Party [BJP] to show its political vendetta and nothing else. He said that the nationality of his father had been well out in the open, evident through his writings and publication. Taseer also revealed in his interview that he has an absolute authority from a source who works in the government, who confirms that it was done by one of the yes-men of Mr Modi, only in order to please him. He also says that the much controversial title- ‘Divider-in-Chief’ was not his creation and instead chosen by the publishing magazine. The attack on the journalist is not an isolated event. Instead, it can be seen that similar attacks on the freedom of speech and expression are widespread in the country in a somewhat systematic way after the BJP assumed power at the Centre. The only difference is that Taseer’s father’s nationality was served on the plate to these playing the game of political vendetta as then it became effortless to attack the young writer.

Modi government, on the other hand, claims that there is nothing political behind the revocation of the OCI cardholder status of Aatish Taseer and it was merely done because it came on record that he concealed the nationality and origin of his father, who was a Pakistani. Taseer, in his defence, says that he well agrees that his father was of Pakistani origin. His parents are not married, and he has been raised by a single mother in India. The documents for an OCI card was filled by his mother back in 2000. The proper way to operate in this manner would have been asking for clarification if they came across any discrepancy or missing document. Taseer’s mother, Tavleen Singh, is a famous Indian author and journalist. His father, Salman Taseer was of Pakistani origin, a famous author and politician. Through his interview, Taseer has appealed to the Modi government to discourage the ‘politics of vendetta’ and acknowledge that he did not engage in actively concealing any information. He said he is a writer stepping into writing about the pressing concerns in India.

Criticism is the soul of a journalist, its dharma.

He further said that if he is asked to stop criticising, it would be a sad death to his dharma. He said that the freedom and the right to criticism is the very lifeblood of journalism. He said that if one asks you to pull your punches to work and live freely in a democratic country, I would say a no. This would be the death of one’s dharma, an ‘intellectual death’, Taseer said.

“I think the spirit of freedom of discussion, dissent and tolerance is not only an integral part of the modern Indian nation but is in the Hindu soul. Therefore, to create an atmosphere, where critics are silenced or terrified, where a climate of terror prevails – you are really doing violence to the spirit of what India has stood for not just for 70 years but millennia,” Aatish Taseer said.

Politics of fear and vendetta ongoing in democratic India

While being asked by the interview about the difference between stifling of dissent in India at the time of the Indra Gandhi rule and that at the present times, he said that Indira Gandhi’s modus operandi during the time emergency prevailed in the country was hideous, however, he went ahead to say that India has managed to survive through it to stand on its feet again. He also says that how Mr Modi has taken on the democratic country since 2014, it is a pressing environment of politics of fear, prevailing political vendetta, silencing of the critics and widespread intolerance against the minority communities. He said that Modi is the architect behind all of this and he is the one who is to be held answerable.

Taseer expresses a deep sense of grief on not being allowed to visit the country where he was brought up and had lived for a long time. He said that his grandmother, who raised him, is now at a delicate stage of age, 90 years old. He said, “I feel like I have been bereft of a country I have always considered my home.” He says his grandmother instilled in him extensive Indianness, given that she was a part of syncretic India. He has said he is ready to fight even if that means knocking the doors of the government or the court, filing a review petition or whatever else means he has to adopt. Taseer said “They have left me bereft of my country,”

On being asked if he would be willing to have the restoration of his OCI status on the condition that he never writes critically about the Indian government, Taseer said a definite no. He says as a journalist, ‘it would be a bigger death of my profession’.

AirAsia cuts staff salaries by up to 20 pc for April