The unfortunate clash of the ‘protectors of law’:

Much has happened in the country since the two law protecting arms clashed with one another, in what is remarked to be an ugly fight. It is alleged that over a trivial matter regarding the parking space, a cop allegedly open-fired on a lawyer in the parking lot of the Tis Hazari Court. The clash aggravated in response when the lawyers put a police vehicle on fire, blocked the roads, demanding the arrest of the policeman. Many were injured in the clash and admitted to St. Stephens Hospital. It was outside the lockup around noon of November 2, 2019 when a lawyer identified as Vijay got into an argument with a policeman. The matter was restricted to aggressive verbal exchange when it is said that the third battalion of the Delhi Police open-fired from his service weapon. What followed just worsened the situation, Afterwards, a huge posse of police vehicles and other anti-riot vehicles were deployed at the venue of the incident. After that, the lawyers, as well as the police, sat on protest, near the court premises. Both demanding strict action against the other. 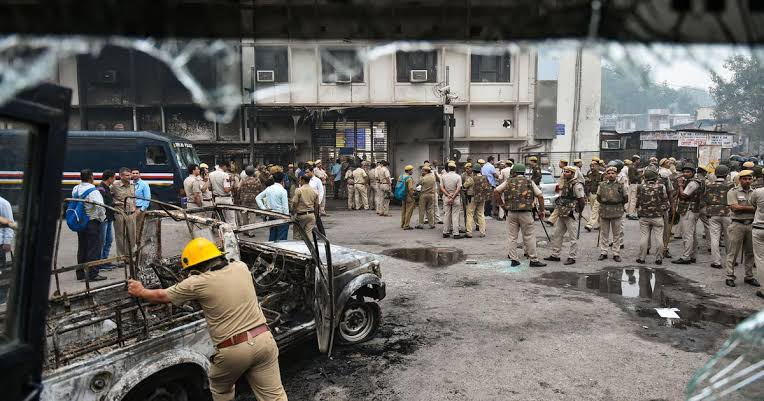 In what is said to be unprecedented, the Delhi Police personnel in huge numbers took to the streets in protest. They laid a siege outside the police headquarters on November 05, 2019 and staged a virtual revolt as sparked in the scuffle at the Tis Hazari Court.

Taking immediate notice of the matter the petition was registered suo motu, a special sitting of the Delhi High Court was arranged which ordered a judicial enquiry into the said matter. It constituted a team to be headed by Justice SP Gard, a former judge of the Delhi High Court along with the vigilance wing of the Central Bureau of Investigation [CBI] and the Intelligence Bureau [IB], to be finished within six weeks. The clashes have not paused then. It is alleged that a policeman on duty was stopped outside the Saket Court complex and beaten ruthlessly with a helmet. This is what led to the widespread aggravation of the protest staged by Delhi Police. In the said matter, a statement was issued by the Central IPS Association which sought befitting legal action including cancelling the licenses of the erring Advocates involved in the scuffle. The Delhi High Court earlier once adjourned a plea seeking disciplinary action against Commissioner, Delhi Police, for not taking required action against the participating police personnel with a direction to take recourse to right office and settlement before seeking any instructions.

The matter went up to the Delhi High Court which issued notices to Bar Associations, Bar Council of India and the central government for want of their response to an application made by the police officers. On November 03, 2019 the court issued an order directing immediate suspension of the police officers who fired the gun-shot pending the judicial enquiry. The one common demand coming from the Bar Council of India as well as the Bar Associations of the Delhi High Court and of other district courts in Delhi is demanding arrest of the two suspected police officers involved, alleged to have fired the gun-shots injuring three advocates.

The applicants are suspected to be the ones who open fired gun-shots at the place of incidence, seeking interim protection from any coercive legal action until the judicial enquiry meets a finality. The counsel representing the petitioners who moved the application clarified before the court that the application is not one for anticipatory bail but rather for protecting the applicant throughout the course of the judicial enquiry. In addition, the council also demanded that a direction be issued to the subordinate courts, barring them from releasing any orders in the said matter, until the judicial enquiry is completed. It was also argued that with mutual dialogue and cooperation between the group of police and lawyers, the ongoing strike of the two was called off. However, soon after in a few days’ time, it was resumed demanding the arrest of the said applicants, as soon as the matter reached the court. Advocate Mohit Mathur appeared for the Delhi High Court Bar Association & argued that there is no way to ensure parity between the protection. He referred to the protection that is being offered to the lawyers, against whom FIRs were lodged and the two police officers, who in a manner initiated the scuff by firing gun-shots. He argued that the complaint of the lawyers is regarding the inaction of the police, which in no way raises any apprehension of the arrest of these policemen. The matter was posted before a Division Bench of the Delhi High Court headed by Chief Justice DN Patel along with another Justice Hari Shankar. The court on this matter noted that no coercive action should be taken against the applicants unless the notices are filed.

Application by the National Commission for Women [NCW] for assault of women police officers; video and audio clips in evidence.

Another development in the matter took place when the National Commission for Women [NCW] addressed a letter to the Chairman of Bar Council of India [BCI], Manan Kumar Mishra. The letter is seeking the suspension of licenses of Advocates who were involved in the violence committed against women police officials during the violent clash between police and lawyers at the Tis Hazari Court on November 2. NCW took suo moto cognizance against the abuse and assault faced by few women police officers of Delhi and has urgent the BCI to immediately take up the matter and take intense action against the erring Advocates. It prays in its letter to the BCI to treat such abhorrent acts of manhandling women as “gross misconduct”. On a closer perusal of the contents of the message, the Commission argues that there is sufficient material on record, obtained by way of media reports, enough to prove that women police officers were certainly manhandled in the brawl. The stories being referred to contains an audio clip of the women Personal Security Officer (PSO) and a live video captured on the scene of the crime of 1 min 40 seconds duration, which corroborates the claims of the NCW. The video clip clearly shows that woman officer was dragged into an awkward situation when a group of lawyers tried to grab her collar and charged at her, who was later difficulty managed to be escorted and get out of the scene. Apart from addressing a letter to the BCI, NCW has also taken up the matter with the Commissioner of Delhi Police, Amulya Patnaik. They plead the CP, New Delhi to take immediate steps into the case, requesting an inquiry taking appropriate action at the earliest. The request of NCW has gone before the BCI and the police to hold an enquiry and ‘take apposite steps’ within seven days, as reported by Live Law.

It is only a day ago when the police officers have resumed duty while the lawyers continue to be on strike. The Deputy Commissioner of Delhi Police, Monika Bhardwaj acquainted the District Judge Girish Kathpalia regarding the status of security of the Tis Hazari court premises. She informed that police personnel had been deployed at the three entrances of the court premises. Given the hostility between the lawyers and the police, twenty policemen have resumed duty in civilian clothes and not in uniform. They are guarding the entrance points of the lockup area, where the incident had taken place and are under direct orders to communicate the senior officers if any altercations took place with the protesting lawyers. In all six district courts in the national capital, the lawyers continue to boycott on November 14, 2019, in protest of the turnout of events that took place earlier. Thereafter, only proxy counsels are appearing before the court and seeking adjournments to post the matter on a later date. Near the Saket Court, we witnessed a march by hundreds of lawyers raising slogans and holding placards, seeking justice. The rally went to the extent that roads were blocked and traffic diverted. It has been said that the advocates of all the district courts are planning a protest outside the Parliament on November 20, as told by the General Secretary of Coordination Committee of All District Courts Bar Association in New Delhi, Dhir Singh Kasana. Though there is no sign of violence and the protest is overall peaceful, the situation is grim as the protesting lawyers are keeping an eye on any advocate entering the courtroom. The ongoing protest has to lead to a loss for the litigants, and urgent cases are being deferred due to non-appearance of counsels. It was reported by Outlook India, that the judgment in the case of alleged sexual and physical assault of many girls at a shelter home located in Muzzafarpur, Bihar has been deferred for a month, while the 20 accused continue to be lodged in the Tihar Central Jail. Another case being affected in the 2017 Unnao rape case which was being dealt with by a fast track court, supposed to be heard on a day to day basis following the orders of the Supreme Court. This was because the accused former BJP MLA Kuldeep Singh Sengar couldn’t be brought to the premises, apprehending security threats, given the hostile environment.

Amidst the strike, a meeting of the members of all district courts bar association took place with the representative of the Delhi Police as well as the Lt Governor Anil Baijal on last Sunday. This took place as per the orders of the Delhi HC which is hearing the matter but has failed to find any resolution as informed by Kasana.

In a recent development in the case, on November 15, 2019, the Delhi High Court has granted interim protection from any coercive action, as applied for by the two police officers suspended after the scuffle- ASI Kamta Prasad and another Pawan of the Delhi Police. Against the two, there have been three FIRs registered in the matter. The matter was presided over by a Division Bench headed by Chief Justice of Delhi High Court D.N. Patel and Justice C. Hari Shankar. The application was moved as a part of the petition taken up by the court relating to the incident suo motu. The two police officers were represented by Advocate Rajdipa Behura who argued that while the lawyers have been granted similar protection regarding the FIRs, while application of the police officers are pending, as reported by Bar and Bench. The matter has been posted for hearing on December 23.

Age Of The Autosexuals: What It Means To Be Sexually Attracted...

Bidding a farewell to hugely popular brands, the effects of coronavirus...