From disinfection and street patrols to food and medicine delivery in quarantine wards, robots are being deployed at the front lines to contain the spread of the novel coronavirus, which has claimed hundreds of lives in China.

More than 30 disinfection robots designed and produced by a Shanghai enterprise have entered major hospitals in Wuhan, center of the novel coronavirus outbreak, to combat the epidemic.

The white robot has a hydrogen peroxide sprayer on its “head” and nine ultraviolet lamps in its “belly,” and can perform multiple forms of disinfection in environments where humans and machines coexist, according to Pan Jing, CEO of Shanghai TMiRob, the manufacturer of the robot.

At present, such disinfection robots have been used in isolation wards, ICUs, operating rooms and fever clinics of Wuhan’s major coronavirus hospitals including the Central Hospital of Wuhan to provide around clock disinfection service.

Chinese health authorities Friday said they received reports of 3,143 new confirmed cases of novel coronavirus infection on Thursday, bringing the total to 31,161 from 31 provincial-level regions and the Xinjiang Production and Construction Corps. A total of 636 people had died of the disease by the end of Thursday.

China has called on the country’s artificial intelligence (AI) sector to lend their technological hands to help battle the epidemic.

Related AI technologies could be applied to roll out smart devices to support diagnosis and treatment, and used in telecommuting, online education and intelligent production to ensure minimal disruption to people’s lives.

Meanwhile, researchers of a Hong Kong university have invented a fast portable detection device for novel coronavirus that reduces the whole procedure from sampling to testing to merely 40 minutes.

Play video games but according to our rules says teens parents

US stocks fall as market decline extends for third week 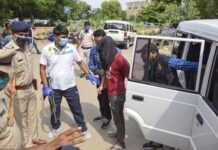 In Pics: Mumbai under coronavirus lockdown — here’s how the city...