The US has tested 1 million people in its stepped-up effort to tackle the coronavirus pandemic, while the total number of cases has increased to 164,274.

“Today we reached a historic milestone in our war against the coronavirus. Over 1 million Americans have been tested,” Xinhua news agency quoted President Donald Trump as saying on Monday at a White House briefing.

Alex Azar, Secretary of Health and Human Services, said the US was now testing 100,000 samples a day in their effort to combat the outbreak.

According to the latest tally from Johns Hopkins University’s Center for Systems Science and Engineering (CSSE), there were a total of 164,274 confirmed cases in the US, the current highest in the world, with 3,164 deaths.

New York state, the epidemic of the pandemic in the country, has reported the maximum number of deaths at 914.

Meanwhile, Washington D.C. Mayor Muriel Bowser on Monday issued an order directing residents to stay at home unless there is an essential reason for going out, such as getting food and medical care, performing or accessing government services or engaging in essential business or travel.

It is a crime to disobey the order, and people who violate it could face up to $5,000 in fines, imprisonment for no more than 90 days, or both, said Bowser.

“Staying at home is the best way to flatten the curve and protect yourself, your family, and our entire community from COVID-19,” said the Mayor.

As of Monday, total confirmed COVID-19 cases in Washington reached 401, with nine deaths, according to the CSSE.

The District had earlier ordered all non-essential businesses to shutter, and the latest order came as similar measures were taken on the same day by the states of Maryland and Virginia.

New York City, where non-essential businesses are also closed till April 15 in accordance with a statewide mandate, has also tightened rules on social distancing, which experts say is essential to slowing the spread of COVID-19.

Local police have been patrolling on the street dispersing public gatherings over the past week.

Mayor Bill de Blasio said on Sunday that those who do not practice social distancing will be fined between $250-$500 by police.

The most populous city in the country has been the hardest hit with over 36,000 cases reported by Monday afternoon, data compiled by the CSSE showed.

Monday also marked the opening of the first 1,000 temporary beds in the field hospitals assembled by the Army in the Jacob K. Javits Center in Manhattan.

From Stone Age Symbols To Alphabets And Now Emoticons – Are...

Maharashtra government yet to ‘convince’ Bombay HC over restrictions on doorstep... 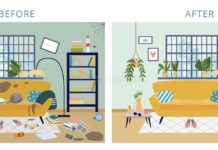 ‘Your call to avoid any large gathering is appreciable’: PM Modi...