“Who is the most good-looking guy from the right-wing?” a colleague asked me a few days ago. After thinking for about an hour of all the political figures I know from the right, I said, “Does Tejasvi Surya, BJP’s young and dynamic MP from Bangalore South count?”

He dismissed my choice right away. However, after I asked a few of my friends for their opinion, they said Surya is the best the right-wing has in terms of looks. A few days passed and the Maharaja of Gwalior, Jyotiraditya Scindia, made his move into the saffron party and the debate for the most “good-looking” guy from them ended there and then. The former Congress leader won hands down in a survey of seven people (still larger than the sample size of an Exit Poll).

Despite his decent dressing style, articulate English and age by his side, why did Tejaswi Surya lose to Scindia in the said survey? You don’t have to go any further but watch the latest podcast of stand-up comedian Kunal Kamra’s Shut Up Ya Kunal.

See also  Kota students to be put in home quarantine

I remember hearing Surya’s speech before the 2019 Lok Sabha Elections in which the 29-year-old made the most famous declaration. “If you are with Modi, you are with India, if you are not with Modi, you are anti-India,” he said. His belief in the Prime Minister was unwavering and baffling at the same time. Ever since his speech, I categorically avoided his prime-time debates and even those in the Parliament. He was just not my cup of tea. However, Kamra’s episode was just unavoidable.

Minutes into the show, Surya asked Kamra, “Are you of the left-liberal tribe or do you fall under the extreme urban naxals?” The MP also came up with a slew of adjectives for the comedian who has recently found new fans after heckling Arnab Goswani mid-air. Left-liberal, leftist, card-carrying communist and communist were some of the words Surya associated Kamra with.

“We are already a Hindu Rashtra,” declared the BJP leader. “Acceptance of all, liberalism in the true sense, respect for individual rights, recognition of the spiritual traditions native to this land,” he said was his idea of the “Hindu Rashtra”. The Bangalore South MP also showed support to the LGBT community (or I might have read too much into it), rather than most BJP leaders’ ‘don’t ask, don’t tell approach. “Respect an individual irrespective of the gender or their orientation,” he said.

Kamra asked Tejasvi Surya, an RSS protégé, for the organisation’s contribution to the Indian freedom struggle, which it is often criticized for their zero involvement. Surya dismissed the question saying, “The RSS publishing wing has brought a 300-page book, detailing its contribution to the Indian freedom struggle with details of who had participated. For those who are genuinely interested, they can pick up the book and then make a criticism.”

Speaking on Mahatma Gandhi’s assassin, Nathuram Godse, Surya said it wasn’t an act of Hindu Terror. “It was an unequivocally, categorically, condemnable murder.” He added that the term was created by the Congress party, especially Chidambaram, at the behest of the party’s top bosses. He also noted that there is no evidence against terror-accused and BJP MP Pragya Thakur in the Malegaon blast. “Till today there has not been a single case where so-called Hindu terror has been committed,” Surya claimed.

The Bangalore MP got a phone-call mid-interview and asked the comedian to wrap up the show. “Thank God! This is finally done,” I said.

But No! Surya had to bring in Pakistan (BJP guys should get a patent over this) and this time he brought in Saudi Arabia too. He said to Kamra, “You are a celebrated comedian in India because India is primarily a Hindu Rashtra. Who are the top 5 comedians from Saudi Arabia?” The 29-year-old’s comparison of the absolute monarchy of Saudi Arabia to the democracy in India was pure ignorance but I didn’t expect any better.

At the time of the coronavirus pandemic wreaking havoc, claiming the lives of thousands. My only advice would be to avoid this 43-minute snoozefest. Netflix and Prime have made sure that there are better things to watch.

I’m a very lazy person and go to the gym when... 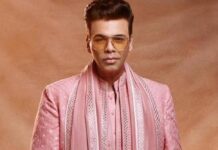 Karan Johar gets ready for his ambitious project ‘Takht’ with the...