South Korea reported 103 new virus cases on Friday, one of its biggest daily jumps in months, as officials express concerned that infections are getting out of control in cities as people increasingly venture out in public.

Eighty-three of the new cases were from the densely populated Seoul metropolitan area, where health authorities have struggled to stem transmissions from various sources and groups, including churches, nursing homes, schools and workers. Infections were also reported in other major cities such as Busan, Gwangju and Ulsan.

Eighteen of the new cases were linked to international arrivals, which health officials consider a lesser threat than local transmissions because testing and two-week quarantines are mandatory for all passengers arriving from abroad.

South Korea on July 25 had reported 113 new cases of COVID-19, which was its first daily jump over 100 in nearly four months, but that was a predictable spike driven by imported infections found among hundreds of South Korean construction workers airlifted out of Iraq.

Friday’s jump was more concerning as it was driven by local transmissions, which health authorities said could worsen because of the increase in travelers during the summer vacation season.

Prime Minister Chung Sye-kyun during a virus meeting on Friday said that authorities will be forced to consider elevating social distancing measures in the greater capital area — something policymakers had been reluctant to do over economic concerns — if transmissions continue to rise.

He pleaded for citizen vigilance during a three-day holiday that continues through Monday and criticised plans by some activist groups to hold rallies in Seoul on the weekend despite the city’s ban.

During a briefing Thursday afternoon, Kwon Jun-wook, director of South Korea’s National Institute of Health, pleaded for residents in Seoul and neighboring areas to stay home or wear masks at all times if they have to go out.

If the infections are worsened by the summer vacation season, as well as increased travel or major rallies during the three-day holiday period, we could slip into a situation that would be really hard to control, he said.

South Korea has so far weathered its COVID-19 epidemic without major economic lockdowns, although officials shut schools until May and temporarily closed entertainment venues in some major cities when infections rose.

Health authorities have instead relied on aggressive testing and technological tools, including extensive use of mobile-phone location data and credit-card records to trace contacts and smartphone tracking apps to monitor tens of thousands quarantined at home.

Visitors at nightclubs, karaoke bars wedding halls, baseball stadiums and other facilities deemed as high-risk are required to register themselves with smartphone QR codes so they could be easily located when needed.

Still, health authorities have recently said they are finding it increasingly difficult to trace contacts and predict infection routes as people increase their social and economic activities.

The figures released by the Korea Centres for Disease Control and Prevention on Friday brought the national caseload to 14,873 cases, including 305 deaths.

Matrubharti is shifting the gears, from crowded community to a... 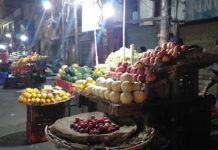