An auction agency of Bristol has auctioned the spectacles of Mahatma Gandhi for Rs 2.55 crore. It has been bought by a collector of America.

Auction agency, East Bristol Auctions, says that they found the glasses on August 3 in a plain envelope where someone had left it.

Andrew Stow of the agency then said that he expected it to sell for more than Rs 14 lakh, which would be the most important auction in the company’s history.

The owner of this spectacle, the elder of Mangotsfield, Bristol, says that he will share the money received from the auction with his daughter.

It is said that Gandhi had given these glasses to his uncle when he was working in South Africa. This was the period between 1910 and 1930.

Andrew Stow of East Bristol Auctions, who auctioned the glasses, reportedly said, “For almost fifty years these glasses have been locked in such a cupboard. The auctioneer once told me that he wanted to throw them away. Because they are not benefiting from this. Now they have got such a huge amount for it which will change their life. “

“This auction is a good thing for an elderly person who owns glasses, perhaps because he has gone through a difficult phase recently and this amount will help him a lot.”

“We are happy that Gandhi’s spectacles have found a new place and we have helped in this work. This auction is not only a new record for us but is also historically important.”

How to get glasses in letter box

The Auction Company had previously said “Someone put it in our letter box on Friday night and it stayed there until Monday”.

After getting the glasses in the envelope, he contacted his boss and explained its importance. He says that the owner of the spectacle had had ‘almost a heart attack’.

“One of our staff gave it to us and said that it contained a letter stating that it was Gandhi’s glasses,” Stow said.

The owner of the spectacle says that a member of his family met Gandhi during a visit to South Africa in the 1920s. The glasses went from him to the next generation.

Andrew Stow explains that he did research to find out the history of glasses and found that “we found that all the dates, even Gandhi’s time wearing glasses, were matching.”

He says that this was probably the first glasses Gandhi wore.

Everything you need to know about Bombay Business Conclave 2020

‘Why are you friends with Muslims?’: UP police asks activist arrested...

From buying an award to Raj Kapoor’s affair with Nargis: Rishi... 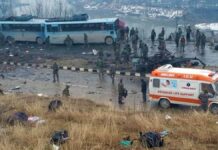 Pulwama Attack: Next act should not be a bloody reprisal

US should get a very large percentage of TikTok sale proceeds:...