The Delhi High Court Thursday asked the Ministry of Railways to consider arranging travel for disabled students from distant places to the national capital for the exams to be conducted by Delhi University.

The high court said the ministry also consider the feasibility of issuing confirmed tickets to such students at subsidised rates at least five days before the second round of exams commence on September 14.

A bench of Justices Hima Kohli and Subramonium Prasad directed the Ministries of Human Resource Development and Social Justice and Empowerment to collectively approach the Ministry of Railways and request for arranging travel of students in the persons with disability (PWD) category from far off places like Bihar, Chhattisgarh and Eastern UP to Delhi to appear in exams through physical or online mode.

The bench, which issued notice to the Railways Ministry to streamline the process for PWD students, directed the three ministries to file separate affidavits on the steps taken by them and listed the matter for further hearing on September 1.

The court said the PWD and Visually Impaired (VI) students who wish to come to Delhi from remote areas may indicate in exams form to the DU as to whether they want to appear physically or submit papers through email and avail scribes.

The court was also informed by DU counsel that results of those students who appeared for online Open Book Examinations (OBE) will be declared at the end of October, if things go well.

The high court was hearing pleas by law student Prateek Sharma and National Federation of Blind seeking to set up effective mechanisms for VI and PWD students so that educational instructions can be transmitted to them properly and teaching material is provided to them through online mode of teaching during the COVID-19 pandemic.

The online OBE for final year undergraduate students commenced from August 10 and will end on August 31. The students who will be left out of online exams will be given an opportunity to appear in physical examinations, to be held from September 14.

Senior advocate S K Rungta, appearing for petitioner National Federation of Blind, said the court may see if the central government or DU can bear the cost of transportation of students and he will provide them food and accommodation.

When the court asked can the benefit of PWD Act be extended to these students to this extent, Rungta said yes it can be done during a disaster.

The court also raised the question of reservation as there is only one train coming from some areas.

Rungta said these students are mostly from Bihar, Uttar Pradesh and Chattigarh and some are from Madhya Pradesh, Haryana and Punjab.

Senior advocate Sachin Dutta, representing the DU, said the figures will show that 90 per cent students in the PWD category have appeared in the online OBE.

Rungta claimed that DU does not have the data of PWD students and according to his information about 222 confirmed VI students are there who did not sit for online OBE. Nobody spoke a word against Ganguly: Arun Dhumal 2022 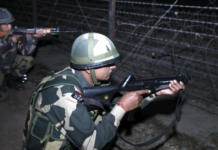 Now pakistan will not be taken lightly, security forces are allowed...

Everest Needs To Be Left Alone!

‘Don’t come without….’: Deepika Padukone has a message for hubby Ranveer...

‘Dostojee’ to release on Nov 11

The Revolution With An Army Suit On – Colonel Saurabh Singh...