Sushant Sing Rajput died on June 14th, 2020, by suicide. His death rocked the entire nation, leaving billions confused by how someone they saw in movies, who they believed was full of life could end his life. Everyone started speculating on how or why he could have taken such a big step. And this is where the media came in.

There were regular speculation on how someone who “looked happy” could take his life. Many went so far as to say that “does he look depressed?” Such statements brought home the point that they had zero idea about both depression and mental health. His pictures were shown with catchy headlines, speculations about his personal and professional life were made openly, and on many social media sites people went as far as showing images of his dead body.

All this also gave rise to the very public trial of Rhea Chakraborty. Her name started floating about after Sushant’s family blamed her of controlling him, using him for money, and even filed a case in Patna against her for money laundering and fraud. The Supreme Court had given the verdict that Sushant’s family’s demand of a CBI probe will be granted.

The CBI, ED, and, NCB are all now involved in the Sushant death mystery. There is still a debate among the public about whether he actually did die by suicide or if it was a murder. The CBI probe comes as a hope for many demanding justice for Sushant.

But even before these agencies can complete their investigation and find out what exactly happened to or with Sushant, the media has declared Rhea Chakraborty the villain, the cause of Sushant’s death. They have been a constant in the case from day one, hounding both Rhea and her family.

This behaviour towards any person, who is accused or not, is extremely harmful and toxic. They have, without any solid evidence, based on hearsay, declared her the sole reason for Sushant’s death, even before the CBI can come to a proper conclusion. They seem to be three steps ahead of all the top agencies.

The media has been very quick in pronouncing judgements against her. From questioning her interviews, to speculating about her relationships with other men, they have tried to dissect every aspect of her life in front of the entire country.

But the biggest question is, is this ethical? Journalism has been made into a joke by many reporters who have been hounding people in the name of justice. This same behaviour has never been shown where an actual guilty criminal is concerned, a rapist, a murdered, or even a terrorist. Then why such bias now?

Where the media is supposed to present the public with objective facts, and show both sides of the story, there has been a clear bias in this case. Where only one side was shown earlier, now, after Rhea has made a public statement, they are leaving no stone unturned to prove her a liar. This is not the work of an objective journalist. Pronouncing judgements and deciding whether a person is a criminal or is lying on national television or not should be left up to the CBI and the courts.

This behaviour of the media has played an important role in changing the perspective of the general public. The public has now started displaying unreasonable hatred towards Rhea and her family, even before they are proved guilty of any criminal activities.

Rhea has become much more vocal about the rape and death threats she has been receiving from the people on social media. Is this not a direct reaction to the hatred they consume through the media?

All this clearly shows that the people have a very deep-rooted misogyny in them. Similar cases have come up in the past, where an actress has committed suicide and her partner has been involved. But non of those cases saw such a public assassination of the man’s image and character. It very clearly shows that India loves a female villain, and will go upto any extent to prove her guilty.

There has been a complete invasion of Rhea’s privacy, the media, somehow, knows about her every move. They have been seen camped outside her house, hounding her with question. Such behaviour is extremely dangerous and some others can take an advantage of the media crowd and fulfil their personal vendetta against her. Even her asking for police security has been ridiculed by the very media that has led her to have a need for this security.

There is no question, that, at the end of this investigation, Rhea could very well be proven guilty. But until that happens, putting unaccounted allegations on her and declaring her a criminal, can prove to be very harmful.

Such behaviour is not only making a joke out of mental health and depression, but also out of Sushant’s death. Pointing fingers and blaming someone, without any concrete proof is an extremely toxic trait that should not be displayed by journalist, whose job is to objective provide information to the public and not try to sway their opinion.

Until the truth comes out, people need to maintain a decorum and not make a big joke out of someone’s death.

Anti-CAA protest: Police detained over 100 protesters after a scuffle with...

New study examines link of socioeconomics with osteoporosis in women

Coronavirus updates from India and the world: Total COVID-19 cases in...

‘Writing my next, Salman Khan has liked the idea’: Sooraj Barjatya 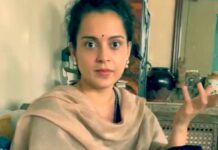 John Abraham to have a triple role in ‘Satyameva Jayate 2’?...