The Delhi BJP on Wednesday advocated the resumption of Metro train services in the city, with its president Adesh Gupta meeting Union Housing and Urban Affairs Minister Hardeep Puri over the demand.

Gupta, who met Puri along with the Leader of Opposition in the Delhi Assembly, Ramvir Singh Bidhuri, said the demand to restart Metro train services in the national capital was raised at the meeting.

Earlier, at a press conference, the Delhi BJP chief said, “Metro trains should be operated with proper standard operating procedures and guidelines in view of the commuting problems being faced by Delhiites since the Delhi government’s transport system has failed.”

There was no immediate reaction from the ruling Aam Aadmi Party (AAP) on Gupta’s comments. Delhi Chief Minister and AAP convenor Arvind Kejriwal had recently demanded the Centre to allow resuming Metro train services in the city.

Gupta also alleged that while the number of coronavirus cases is again increasing in Delhi, the focus of the AAP is to strengthen its support base in Uttarakhand and Punjab.

Kejriwal recently announced that his party will contest the Uttarakhand Assembly polls as a majority of respondents in a survey was in favour of the decision.

At a media briefing on Wednesday, the chief minister said although there was a marginal rise in the number of COVID-19 cases, but the situation was “completely” under control in the city.

See also  After Congress, now NCP opposes Padma Shri to Adnan Sami, says it is 'insult to people of India'

Gupta also alleged that Kejriwal and his deputy Manish Sisodia were not on the same page over the COVID-19 situation in the city.

“The chief minister says Metro trains should be started because the COVID-19 situation is under control, whereas Sisodia is demanding postponement of the JEE and NEET citing the pandemic,” he said.

The BJP leader said the AAP government claims credit for a decrease in the number of COVID-19 cases due to the “Delhi Model”, but it is well known that the pandemic situation improved in the city due to the Centre’s intervention.

Coronavirus updates from India and the world: COVID-19 cases rise to... 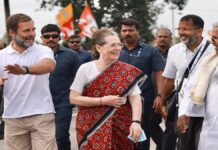 ‘Don’t behave as Tablighi Politician…’: Sambit Patra has a message for...