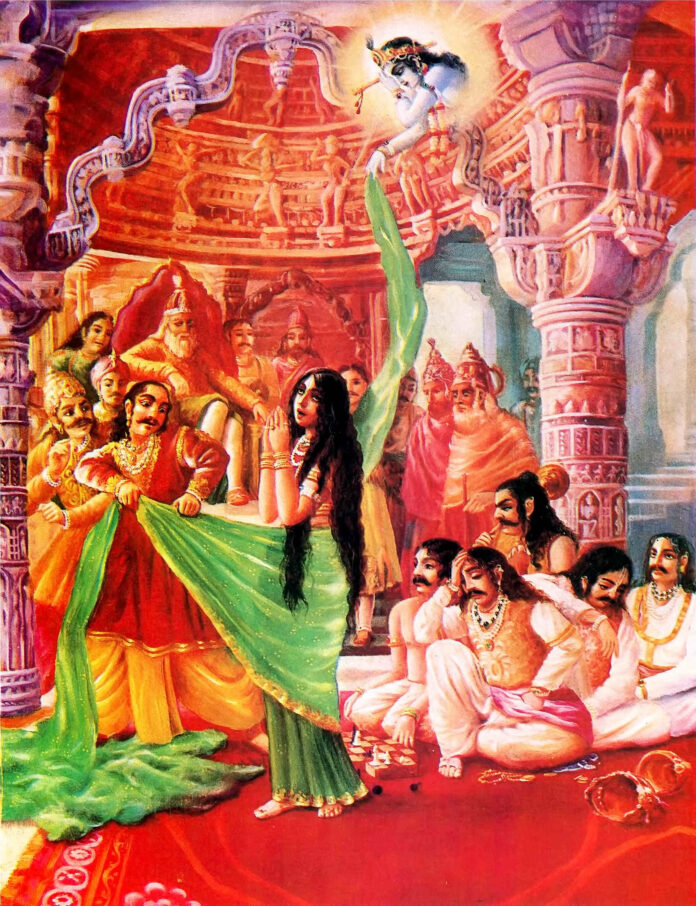 The 1988 epic tele-series ‘Mahabharat’ directed by B. R. Chopra and starring Nitish Bharadwaj, Mukesh Khanna, Gajendra Chauhan, Praveen Kumar, Roopa Ganguly and others re-aired on DD Bharati amid the lockdown imposed due to the novel coronavirus pandemic.

Along with another epic ‘Ramayan’, ‘Mahabharat’ also broke TRP records. According to the latest BARC report, in the rural segment, ‘Ramayan’ which airs on DD National topped the list with 27,169 impressions, while ‘Mahabharat’ which telecasts on DD Bharati came on the fifth position with 6,228 impressions.

In the urban segment, ‘Ramayan’ topped the list again with 34,228 impressions while ‘Mahabharat’ gained 10524 impressions.

To the unintiated, one of Draupadi’s five husbands (Pandavas), Yudhishthir, gambles her away in a game of dice to Shakuni and Duryodhana (the eldest Kaurava). Draupadi questions Yudhishthira’s right on her. Duryodhana’s younger brother Dushasana drags Drau.padi by her hair into the court. However, it was Lord Krishna who saves the day.

The actor who played Draupadi, Roopa Ganguly, took to Twitter and shared a clip of the iconic scene.

A Twitter user wrote, “GOOSEBUMPS while watching Shri Krishna protecting Drau.padi during Cheer Harana. My blood boiled to see how everyone stood mute & did nothing to protect her dignity! It was this Adharma everyone eventually paid for. One who can’t protect his wife doesn’t deserve one.”

See also  Dettol and Lysol labels say products can 'kill coronavirus'. But can they really? Here's an explainer

“This episode was so so epic!! It gives all of us goosebumps that how well @RoopaSpeaks ji has played role of Drau.padi,” wrote another Twitter user.

Here are some of the reactions:

People coming from China will be screened at Indian airports: MEA...

‘I may not agree with you but…’: Manmohan Singh, Voltaire or...

‘Will miss you both’: Sourav Ganguly expresses grief over Rishi Kapoor...

‘How on this planet can Ahmed Shehzad not be in that...

Binge watch guide: 30 movies to watch on Amazon Prime during...