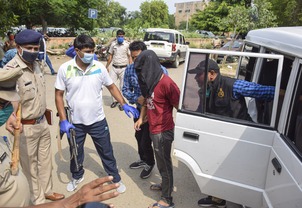 Suspended Chaubeypur station officer Vinay Tiwari and another policemen were arrested on Wednesday on charges of leaking information about police action to gangster Vikas Dubey prior to last week’s encounter in Kanpur, in which eight policemen were killed.

Tiwari and beat in-charge of Bikru KK Sharma, who were suspended soon after the encounter, have also been arrested on charges of fleeing the encounter site and putting the lives of other policemen in danger, Senior Superintendent of Police (Kanpur) Dinesh Kumar Prabhu said.

Both the suspended sub-inspectors were detained for questioning and later arrested, he said. A separate FIR has been registered at the Chaubeypur police station against Tiwari and Sharma for allegedly fleeing the encounter site, a police spokesperson said.

Both the SIs allegedly tipped off Dubey, a dreaded gangster, about the impending police raid, he added.

Tiwari is said to have been grilled by sleuths from the Uttar Pradesh Special Task Force (STF).

From Kashmir to the Indian Constitution, JLF 2020 kicks off with...

Vyapam Scam: Kin of IPS, ex-IAS, among 16 in CBI’s supplementary...