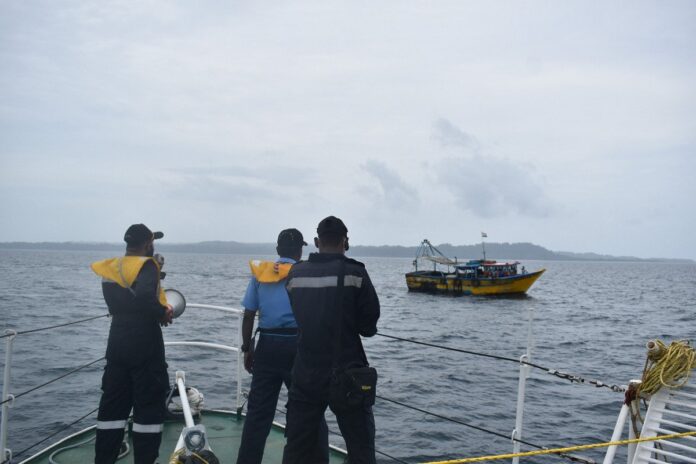 In a swift operation, the Indian Coast Guard (ICG) rescued 20 Bangladeshi fishermen from the sea off Sagar Island near the Indo-Bangladesh international maritime border line after their boats had capsized, the defence ministry said on Wednesday.

The fishermen were rescued on Tuesday and subsequently handed over to the Bangladesh Coast Guard.

The ICG launched its Dornier aircraft post-landfall of the cyclone to sanitise the area close to the coast off Odisha and West Bengal and to assist the mariners affected by the storm. “The survivors were clinging onto the floats and debris from the sunken fishing boat. ICG dropped the life raft in the vicinity and remained in the area till survivors embarked on the life raft,” it said in a statement.

It said the ICG aircraft diverted merchant vessel ‘Nanta Bhum’, which was in the vicinity during its passage from Port Klang in Malaysia to Kolkata, directing it to pick up the 20 people from the life raft dropped by it.

“Coast Guard ships Vijaya, Varad and C-426 were diverted to augment search and rescue efforts and sanitise the area,” the ministry said.

The Bangladeshi fishermen were subsequently taken by ICG Ship Vijaya.

Easter 2020: Wishes, messages, images, GIFs to send over WhatsApp or...

Woman jumps off moving auto in Mulund as driver heads for...

Prabhas 20: Pooja Hegde, Priyadarshi under self-quarantine after shooting in Georgia...

How businesses of Ola, Uber tumble amid coronavirus outbreak