After a political upheaval in the country, the Shiv Sena-NCP-Congress filed a petition in the Supreme Court against the Governor of Maharashtra- Bhagat Singh Koshyari’s decision to swear in Devendra Fadnavis as the new chief minister. The matter was posted in a special hearing on Sunday and was posted before Justice N.V. Ramana, Ashok Bhushan and Sanjiv Khanna. In the proceedings, the Supreme Court bench issued notices to the newly-sworn in Chief Minister, Devendra Fadnavis (BJP) and deputy chief minister Ajit Pawar. They have been asked by the solicitor general Tushar Mehta to produce letters of the Governor on Monday for passing such orders.

The court, after a due course of hearing, took note of all the arguments from both sides. It, in particular, took note of the argument which emphasised that the decision of the Governor taken on November 23, which invited Fadnavis to form a government is ultra vires to the Constitution. As per a copy of the order, the petitioners prayed to pass an appropriate writ, order or direction to Koshyari, the Governor of Maharashtra to invite the alliance of Maha Vikas Aghadi. The said alliance comprises of the Shiv Sena, Indian National Congress [IN] and the Nationalist Congress Party [NCP]. The coalition is supposed to have the support of more than 144 MLAs, as required to form the government under the leadership of Shri. Uddhav Thackrey. However, the Supreme Court had refused to consider the matter of the Maha Vikas Aghadi forming the government, at present, as said in the order. The said matter was posted to a later date, as the Supreme Court thought it was only possible to adjudicate on the said issue as well as decide to grant the interim prayers as sought by the petitioners after visiting the orders. The petitioners praying for conduction of a floor test within 24 hours could only be decided upon when the order of the Governor, as well as the letters submitted by Mr Devndra Fadnavis, were perused. Tushar Mehta, the counsel appearing for the respondents, has been given time till 10:30 am tomorrow, to produce the said letters, for the passing of an appropriate order. None of the respondent parties was present at the said hearing before the apex court today.

The alliance was being represented by senior advocate Kapi Sibal and Abhishek Manu Singhvi, while Mukul Rohtagi represented the MLAs of BJP and other independent MLAs. The solicitor general Tushar Mehta was also present but denied participation as he did not have any instructions and was only served with the copy of the petition late last night.

Appearing for the alliance in general and NCP in particular, Abhishek Many Singhvi argued that the government must be directed to conduct a floor test and prove the required majority immediately. He explained that once the majority has been claimed, the BJP can’t shy away from showing the said majority in the assembly. Both Sibal and Singhvi argued that the court had earlier ordered for a floor test in Karnataka, in a similar situation acting as a precedent. Sibal said before the court,

“We are saying if they have a majority, let them prove it. If they don’t, allow us to form the government,”

Allegations of political influence on the Maharashtra government

Sibal-Singhvi in their arguments also alleged that the said Governor was acting directly under the orders of a political party, without taking names. The act of the Governor was called a ‘smack of bias’, ‘malafide’ and ‘contrary to all norms’. Objections were also raised to the appointment of Ajit Pawar as the Deputy CM of Maharashtra. Singhvi said that he could not be appointed to the said post as out of 54 MLAs of the party, 41 have declared that they do not recognise him as a leader of the political party anymore. For immediate floor test, Singhvi cited the precedent of a similar order in the case of Goa and Uttarakhand earlier. Singhvi argued that ordering an immediate floor test and that it will not at all be invasive, adversarial in any manner. He said,

“If the floor test is ordered for tomorrow, larger issues may come back to the Supreme Court later. How is it possible for someone claiming majority yesterday to shy away from a floor test today?”

The decision of the Governor is beyond judicial review, argues Rohtagi

An argument put forth by the Former attorney general, Mukul Rohtagi, it deposed that the decisions of the Maharashtra Governor are not amenable to judicial review. The argument took shield in the provision laid under Article 361 of the Indian Constitution. He said, that floor test is inevitable, but in no manner does it allow the decision of the government to come under the scope of judicial review. He said,

After hearing all the concerned parties, Justice Ramana observed that the matter concerning the power of the Governor is a settled position. He reminded Rohtagi that the issue at hand is to conduct an immediate floor test. Therefore, the matter has been posted for tomorrow, the court calling for the letters related to the government formation, to come on record.

Kartik Aaryan gets a tight slap from sister Kritika in a...

Kylie Jenner looks unrecognisable as she sneaks out barefoot to visit... 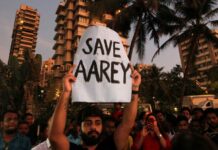 No stay on Metro Shed, extend the status quo on felling...