On Tuesday, 19 people, including student union president Aashi Ghosh, have been booked for the violence on Sunday at the JNU campus. Even after three days of violence, the Delhi Police has not been able to arrest anyone yet. Meanwhile, Hindu Raksha Dal leader Pinky Chaudhary has claimed responsibility for the attack. The crime branch team has reached JNU to investigate the matter. Meanwhile, eminent economist and JNU professor CP Chandrasekhar has resigned from his post in a government panel reviewing economic data due to the situation at the university.

According to the police, an FIR has been registered on the January 5 incident. There has not been any other violence after the incident. On Sunday, some masked men entered the campus and beat up students and teachers and vandalized the hostels.

Investigation of Pinky Chaudhary’s statement continues
Hindu Raksha Dal leader Pinki Chaudhary said that JNU is the center of anti-national activities. we can not afford it. We take full responsibility for the attack at JNU. The attackers were our people. According to government sources, an investigation into the statement made by Pinky Chaudhary is on. Delhi Police has taken cognizance of this. Police are taking help of video footage and face recognition system to identify people who have covered the face of JNU.

700 policemen deployed in JNU
Youth Congress workers took out a torch rally at India Gate on Monday evening. Students also took out a candle march in Tamil Nadu. In Kolkata, Left and BJP supporters came face to face on this matter. In view of security, 700 police personnel were deployed in JNU. Students associated with ABVP at North Gate also protested. The crowd shouted slogans.

The protesters demanded Amit Shah’s resignation
A police officer in Mumbai said that the road near the Gateway of India was jammed due to people protesting against the JNU violence. Tourists and common people were having trouble in commuting. We appealed to the protesters to go to Azad Maidan, but no one listened. Hundreds of people, including students, women and senior citizens, gathered at the Gateway of India from midnight on Sunday to demand action against the culprits. They also demanded the resignation of Home Minister Amit Shah.

Aishi called it a planned attack; ABVP said – Left is responsible for the attack
Aishi said on Monday that it was a planned attack. Some professors associated with the RSS are promoting violence. Saket Moon, vice president of the students’ union, accused the police that they had been informed two hours before the attack, but still received no help. On the other hand, ABVP on Monday alleged that people of Left are also involved in the attack. ABVP secretary in JNU Manish Jangid claimed that the attackers were wearing masks. He was headed by Aishi Ghosh, President of JNU Students Union.

Manish said- We came to know that the attackers were coming towards Kaveri Hostel and I was hiding with my friends in Periyar Hostel. Inside the hostel they attacked the students’ rooms belonging to ABVP. They vandalized the rooms and when I went to the second wing of the hostel they beat me with sticks till I fainted.

There was violence against fee increases
The violence took place on Sunday night during a protest against the fee hike in JNU. The masked men beat the students and teachers badly with sticks and iron rods. They kept creating chaos in the campus for two and a half hours. Several others, including student union president Aishi Ghosh, were injured in the attack. Aishi accused the ABVP of assault and said that the masked goons beat me badly. About 35 people were injured. So far 23 injured have been discharged from AIIMS.

Dealing With Law Enforcements As A Woman in India

9 baje 9 minutes in pics and videos: How Indians lit... 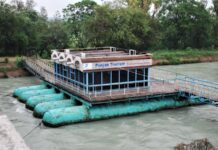 Ravi Shankar Prasad rejected the report of slow down in the...

Many ministers in Maharashtra govt earned their position purely on merit:...