US President Donald Trump has said the environmental policies of his Democratic presidential rival Joe Biden would “destroy” America’s middle class while giving a “free pass” to the world’s worst polluters like China, Russia, India, and many others.

In a major policy speech on his record of natural conservation and environmental protection”, Trump told a gathering in Jupiter, Florida that his administration is proving every day that the US can improve its environment while creating millions of high-paying jobs.

This is a really sharp contrast to the extreme, radical left that you’ve had to deal with. And what you’re doing right now is a lot better than anything you’ve ever been accustomed to, I will tell you that, he said.

Joe Biden’s plan would destroy America’s middle class while giving a free pass to the world’s worst foreign polluters like China, Russia, India, and many others. They don’t have to clean up their lands, but we have to clean up ours, Trump said.

Trump has repeatedly blamed China, India and other countries for allegedly not doing enough for the climate.

He has also blamed India and China for his decision in 2017 to withdraw from the historic Paris climate accord, saying the agreement was unfair as it would have made the US pay for nations which benefited the most from the deal.

Trump said that the agenda of the left is not about protecting the environment, “it’s about punishing America.”

Instead of focusing on radical ideology, my administration is focused on delivering real results, and that’s what we have. We right now have the cleanest air we’ve ever had in this country, he said.

In a statement, the White House said that Trump’s policies are promoting economic growth, while still maintaining standards that allow Americans to have among the cleanest air and water in the world.

While America has become the world’s number one producer of oil and natural gas, our nation has continued to successfully cut greenhouse gas emissions and improve air quality, it said.

The President has also balanced oil and gas production with the interests of residents of the Southeast, withdrawing certain offshore waters from development for 10 years. President Trump negotiated the historic USMCA, which contains the strongest environmental protections of any trade agreement in history, it added.

See also  Canada sees a surge in coronavirus cases after reopening, with colleges scheduled to open in India; are we prepared?

The Opposition Democratic Party in a statement alleged that despite promises to protect Florida’s environment, Trump has torn down climate policies and environmental protections and failed to prioritise Everglades restoration.

The Everglades was an immense ecosystem that once covered about 3,000,000 acres in Florida.

In 2000, Congress approved the Comprehensive Everglades Restoration Plan (CERP) that provides funding for alterations to existing structures and addition of new structures (reservoirs, channels, etc) that attempt to re-create the effect of the original water flow.

Denying climate change, Trump has squandered American leadership and ignored its threat to our environment, economy, and national security, it alleged.

By dismantling clean air, clean water, and public land protections, Trump has done more to eliminate environmental protections than any other president, the Democratic Party alleged. 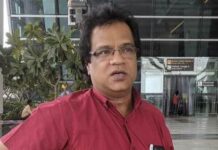 Supreme Court Coordinator of NRC in Assam to be transferred

Delhi’s air was ‘very poor’ on the morning after Diwali but...